Music notation is a complex writing system that should be simplified in a similar way that children’s books are simplified. Children’s books have large font, simple sentence structure, common vocabulary, few types of punctuation, and so on.

Music notation for children should be similar. This doesn’t mean that children should only play open strings or just a few notes. They should play songs with a clear melody. But easy music does not actually address the complexity of notation.

Children seem to ignore the notation they don’t recognize or understand, so removing notation that they ignore might help them. The music will be less cluttered, and there will be fewer markings to confuse them.

Some things I have noticed as a teacher:

Mobile users: there are pictures further down for easier viewing.

I decided to keep the bass clef. It’s a simple enough symbol to explain: “That spiral at the beginning tells us that the music is for people or instruments with low voices.”

It’s pretty weird for a trained musician to look at the music, as it’s missing a lot of what we are used to reading. But I think for a beginner it would be helpful.

There is a natural gap in between the half phrases. Engraving rules space notes based on their rhythmic value, and a lot of beginner songs have longer notes or rests at the end of phrases. So I expect that there will be enough visual space to help separate phrases. This can always be adjusted manually to help make it clearer if necessary.

The space between the half phrases would almost certainly mean more to a child over explaining 4/4 time and that the first two measures are a half phrase and the second two measures complete the phrase. One could even sing it to the student and then pencil in commas and periods to help relate the music to them.

The only bar line I left in is the one at the end. It’s visually distinct, so I’m not worried about students confusing stems with it. It would also be a nice way to introduce the concept of a bar line to a young student, and the only explanation it needs is, “This marks the end of the song.”

Here is a comparison of Twinkle Twinkle Little Star from Suzuki and my mockup: 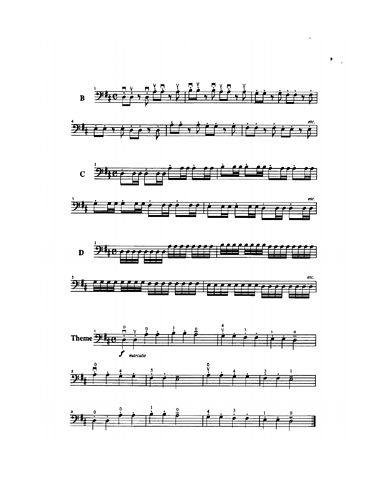 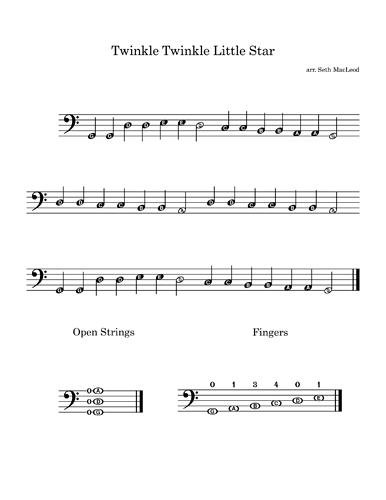 My first impression looking at the two is just how much easier it is to read the larger font size and how less cluttered the page is. Compared to the Suzuki version, there is much less information in the mockup:

That’s a lot of information the student won’t learn to ignore. Instead, they can focus on the music on the page and learning to be comfortable recognizing note names and rhythmic values.

My goal is to write several songs like this so that I can try testing it with new students next school year.

Interesting read! Please make an update in the feature about how it seems to work for your students!